The Realejo neighbourhood has a lot of history. It was there where the Jewish settled, and where, between its labyrinthine streets, you can find the famous washing place of the Puerta del Sol, covered by some columns removed of a chapel which was constructed just next to it. This chapel had attached a cemetery, the Santa Escolástica cemetery.
The chapel was demolished and the cemetery forgotten, new homes were built above it like the Carmen of the Souls in purgatory, inhabited by few years ago by the Porto family. Three members of this family assure that they have been witness of different appearances inside the house. In particular, an appearance of a white lamb and a young woman, blonde, with long hair, and with his face round, just as the mother of Porto brothers described her grandmother. Two strange appearances add to a third one, it is a force which caught the ankle of one of the inhabitants of the house when he was in front of a door at the inside of it, an experience which experienced also the mother and a son of the Porto family. 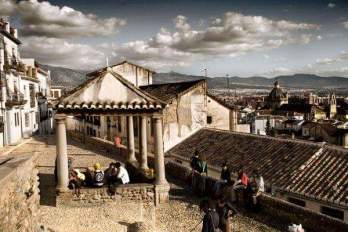 Part of this information has been obtained through:
http://historias-miedo-granada.ideal.es/2015/10/carmen-de-las-animas/